On the Modernist power mesh of Rhea Myers 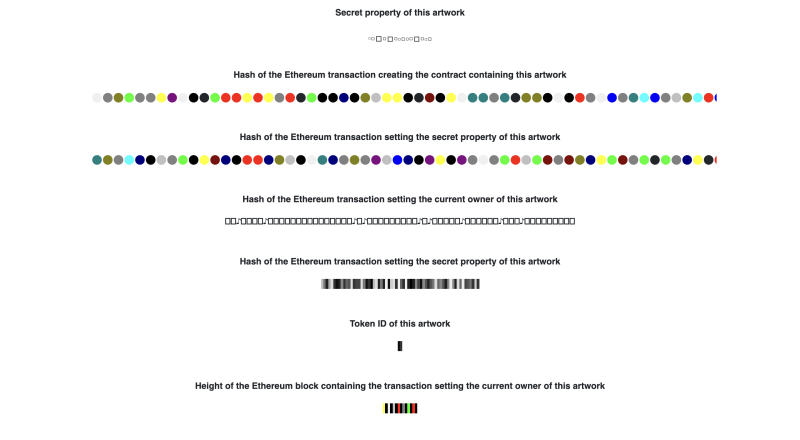 If you search in the browser NFT art or Crypto art, you’d quickly realise that they are still, quite painfully, being used interchangeably by a large number of publications. And this does not even touch upon a relatively new notion - widely known as blockchain art. As many web3 discussions take their roots on Twitter, I had once a conversation with a curator about the differences between these on “DMs” (in layman's words: via a Twitter dedicated communicator). He later moved the topic to wider public to his feed, and once and for all, shared his view on the indigenous factors differentiating blockchain art, nft art versus crypto art.

As Sam Spike says, crypto art “mythologises the origins and ideologies of the crypto culture”, whereas nft art “explores the specific kinds of distribution afforded by tokenisation”.

But it is blockchain art that never fails to beguile me with how it uses the material affordances of the technology to reversely critique its nature and its emerging cultures.

One of the best examples of blockchain art can be found in the works of Rhea Myers - an artist, writer, coder, and hacker who, nota bene, studied in the previous life in the traditional art school in the 1990s, and who grew up in an artistically bohemian milieu - or at least as I’d imagine it so, finding out that her father was also my fellow educator at Central Saint Martins, University of Arts London. She got married, and in her words “has been imported” to British Columbia, Canada, where she had worked for Dapper Labs. The very company behind CryptoKitties, an NFT collectible series from 2017, that to many started the whole lavish crypto journey.

But Rhea’s interest and involvement in the blockchain-related art space started way before this. Over the last decade, she has been working closely with Ruth Catlow at Furtherfield, demystifying the space through her essays, book chapters, and multiple guest talks. One of her earliest blockchain work dates back to 2014, namely “Proof Of Existence”, where she put the hash of her genome on the chain.

Already in 2015, in a piece for Furtherfield, she discussed DAOs (Decentralised Automnomous Organisations) emerging as the new notion that allows for “the creation of entire new organisations and systems of organisations on the blockchain” and to “help create different socioeconomic orders."

The premise of the new governance system, the dawn of a new self-regulating fair social contracting utopia, craves to break along the way existing structures and apparatuses.

This leads me to another one of Rhea’s works - the Token Grid, an Ethereum-based DApp from 2019, where the spectator is invited to burn an ERC-20 token in order to interact with the piece. This work is being exhibited in the launch show of verse - This is Tomorrow.

When it comes to structuring our lives and activities just like in the Foucauldian mesh of power, grids are everywhere. Our daily realities are organised around constant boundaries, social norms, and expectations - the grid in this work is a Modernist icon, a colour-stripped Mondranian network. Rhea nudges us about the grids that can be found on everything, from street maps, or power grids to the pixels on a computer screen.

In Token Grid, anyone can alter the mesh, in contrast to the predetermined system of the street network or architectural constructions. To do so, we must first burn an ERC-20 digital token from the grid smart contract. The idea of burning tokens and power alternation tantalises us through the exhilarating sense of participation in the creative process with pesky satisfaction.

Rhea Myers is one of the artists who resists being summed up by any single theme, and who attempts to depart from traditional artistic notions, social structures, and norms. With Rhea’s works, I relish to see a reflected desire for the creation of new forms of art, philosophy, and social organisation, often outdated or obsolete that long calls for us to revisit and collectively reformulate.

Rhea Myers is an artist, hacker and writer originally from the UK, and now based in British Columbia, Canada. She attended art school at Canterbury College of Art and Middlesex University’s Centre for Electronic Art. Her work places technology and culture in mutual interrogation to produce new ways of seeing the world as it unfolds around us. Since 2013, Myers has been making blockchain art, writing blockchain art theory, and writing blockchain stories.

See the work Token Grid exhibited at the verse's launch exhibition This is Tomorrow.