Entangled Ways of Being - interview with Feileacan McCormick and Sofia Crespo 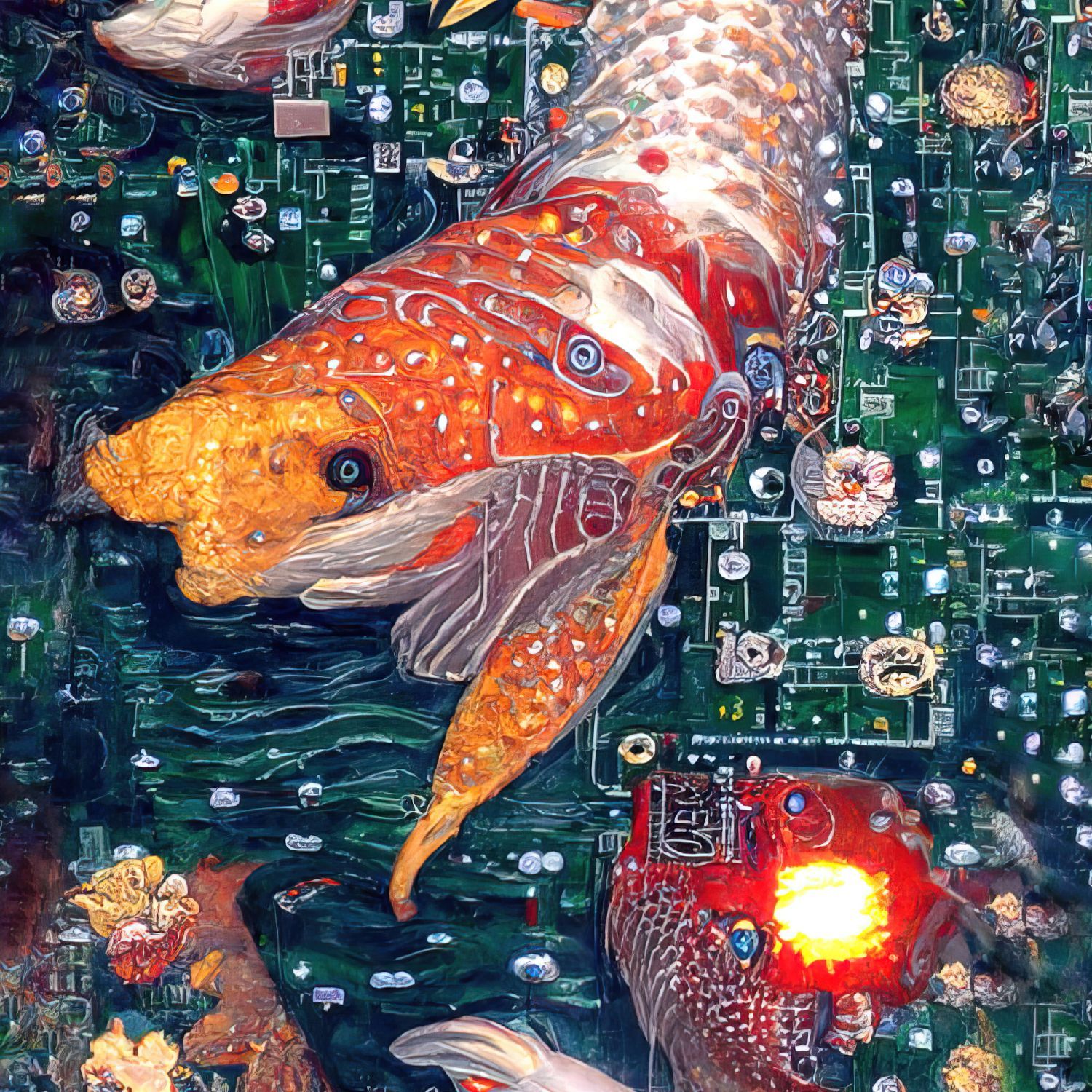 Feileacan McCormick and Sofia Crespo from Entangled Others Studio in conversation with prof. Murray Shanahan and Mimi Nguyen

Murray Shanahan: Do you see artificial intelligence more as a tool for an artist or more as a co-worker?

Feileacan McCormick: In our practice, artificial intelligence is first and foremost a tool akin to a camera or a paintbrush, it affords us certain ways of organising and interacting with a subject matter that the other mediums don't, not in a superior sense, but different.

Concretely, it allows us to make tangible the distilled essence of vast swaths of data that would be incomprehensibly complex to us as human individuals in a manner that is possible to interact with intuitively. Each neural network architecture has its own particular way of extracting patterns, which further nuances how we can shape and manipulate the resulting works.

Sofia Crespo: Over time neural networks have become a toolkit that is part of a larger, generative framework for our artistic practice, one that we hope will continue to evolve along with the works that we create.

Mimi Nguyen: In the middle of the nineteenth century, the first computer programmer, Ada Lovelace wrote about the Analytical Engine that it “has no pretensions to originate anything. It can do whatever we know how to order it to perform.” But a century later, Alan Turing believed that technology can adapt and develop animal-like “conditioned reflex”, that could then lead to something not far from “learning” ability. He wrote that “Machines take me by surprise with great frequency”. How do you see machine-crafted creativity in your work?

Sofia Crespo: There is a vast gradient in the two poles referenced, from the ability to construct instructions from what we are able to deconstruct into comprehensible (for a computer) pieces, to the notion that we can build complex sets of instructions that can in turn display emergent properties of adaptation, learning and change. We are constantly inspired by the concept of Artificial Life as pioneered in the 80s and 90s wherein computer programming was used to create systems that had deceptively simple small sets of instructions, agents, that through following the rules set in their code could together form complex, emergent properties of behaviour, form and evolution. These many avenues of exploration revealed just how even a simple ruleset can become an organic-like, interactive system capable of constantly surprising us with novel results.

Feileacan McCormick: We see a lot of our work as trying to find ways of using systems in order to augment our creative process, to externalise certain parts of what would otherwise be an entirely internal personal practice and thus be able to explore with a far vaster range of potential variation (thanks to randomness) through constructing feedback loops that explore the many different ways of creating performative rulesets. These feedback loops, wherein we input data into a certain system or ruleset and intuitively navigate the outputs, become a means of continuously exploring just how much machines can surprise, but also more crucially, hold up a mirror to our own aesthetic preferences and biases.

Mimi Nguyen: I met Sofia right before your panel with her in the Natural History Museum. Whilst trying to find the Lecture Theatre, we ended up wandering around dinosaur fossils. In “Ways of Being”, James Bridle tantalises us with the idea of rejecting the anthropogenic models. He suggests network theory to provide us with one ecological lesson: “we exist, not alone at the top of the tree, but as one of many flowers which bloom in an endlessly proliferating, entangled and cross-fertilising thicket.” If AI is here not to compete, supersede or threaten us, how can we appreciate and work better with machines?

Murray Shanahan: We need to distinguish intelligence from autonomy and autonomy from full-blown agency. Much of today’s AI has intelligence (of a sort) without autonomy. Some of it has a degree of autonomy as well as intelligence. But nothing in AI today has agency in the proper sense of the term (even though we often use the word “agent” in the field). An AI system without autonomy, such as the sort used by most generative artists, is passive; it’s really just a tool. Most AI is like that, but we do we have autonomous AI systems too - systems that act by themselves, without human intervention - such as a vacuum cleaning robot. But a system with true agency wouldn’t just act by itself, it would act *for* itself, which is something else altogether. It’s only systems with true agency that could compete with, threaten, or supersede us. These don’t exist today, and we should be very careful about building them. But even today’s AI systems can have a huge impact on the larger systems of which they form a part - society, the economy, the ecosystem. It’s important to try to think through these impacts, although this is hard because of the unpredictability inherent in any complex system. I don’t have any easy answers to this, but I do think we need to recruit other disciplines to help, such as philosophy, sociology, and anthropology.

Mimi Nguyen: Can you tell us more about the project Hybrid Ecosystems?

Sofia Crespo: This series of works came about as an extrapolation of the question 'can you imagine a colour you haven't yet seen?', naturally the answer to this question is no, but it does imply that what is outside our experience is not readily available to us.

Parallel with this question our previous (and ongoing works) have been a process of unveiling just how entangled and interwoven our digital and physical worlds are. Whilst they (the digital and physical world) seem at first glance separate, which is further reinforced through the manner in which digital interfaces are designed. The reality of our mundane life is that these two layers of reality are in fact tightly interwoven, constantly influencing, interacting, shaping & reshaping, consuming and acting. Our inherited bias towards seeing the man-made, or artificial, as different from the natural world further obscures this reality where digital agents (software & hardware) behave and interact as an ecosystem, also with the natural world.

Feileacan McCormick: As a way of engaging with this, we took our starting point in examining the benchmark datasets that are typically used to evaluate the performance and accuracy of neural network architectures, the most well-known of these being Imagenet. These datasets very much are an attempt at gathering what we would consider a usefully representative slice of our modern (western) mundane reality, the categories being things we would typically find relevant to recognise in a day-to-day context such as cars, dogs, buildings, people, toasters and so on. Naturally current neural networks have become eerily good at not only recognising but also generating synthetic examples of these mundane categories.

By using these pre-trained "mundane" models that can only recreate from the data that they were trained upon, we began a process of prompting, manipulating and stretching these networks in order to create speculative representations of the entangled reality of the digital & physical. Exploring how we can stretch our imagination so as to see a world of harmoniously interacting artificial and natural life as one single, sustainable ecosystem, starting from the day-to-day frame of reference.

Sofia Crespo: Two works in this exhibition are cyanotypes - one of the oldest photographic printing processes. I find Anna Atkins work from 1843 deeply inspiring because she was discovering the use of new technology to document the natural way in a way that hadn’t been done before, especially when the most prevalent way of documenting back then was writing and drawing.

Murray Shanahan: Artificial intelligence and machine learning have made huge progress in recent years. If you could imagine a new generation of AI art, what would it be like?

Feileacan McCormick: This is a challenging question, one that is really very hard to answer, if only because we really would like to be surprised by wherever AI art might go next.

We think interfaces will become ever more user friendly to artists working with AI tools, giving us more control over fine-tuning, art directing models, and shifting through different data formats.

Sofia Crespo: Hopefully, coming generations of architectures and models will be ever better at diverse representation and become ever more useful toolkits for helping each artist in the articulation of their particular voice and message. Perhaps we can only hope it will be so multifaceted that there is no clearly recognisable border to where AI art begins or ends.

Feileacan McCormick is a Lisbon-based generative artist, researcher & former architect. His practice focuses on ecology, nature & generative arts, with a focus on giving non-human new forms of presence & life in the digital space.

Sofia Crespo is an artist working with biology-inspired technologies. One of her main focuses is the way organic life uses artificial mechanisms to simulate itself and evolve, implying the idea that technologies are a biased product of the organic life that created them and not a completely separated object. Crespo looks at the similarities between techniques of AI image formation, and the way that humans express themselves creatively and cognitively recognize their world. Her work brings into question the potential of AI in artistic practice and its ability to reshape our understandings of creativity.

Professor Murray Shanahan is a Professor of Cognitive Robotics at Imperial College London, in the Department of Computing, and a senior scientist at DeepMind. He researches artificial intelligence, robotics, and cognitive science His publications span artificial intelligence, robotics, logic, dynamical systems, computational neuroscience, and philosophy of mind. His current interests include brain connectivity, neurodynamics, comparative cognition, and the relationship between cognition and consciousness. His book "Embodiment and the Inner Life" was published by Oxford University Press in 2010, and his new book "The Technological Singularity" will be published by MIT Press in 2015.

Feileacan McCormick and Sofia Crespo will be showcasing the new series of Entangled Others in the Verse's exhibition "Entangled Ways of Being" showcasing their project "Hybrid Ecosystems".

See the works in the collection on Verse on Monday 08 August at 11AM EST | 4PM BST: