Stochastic Calculus of Colours - BYMA in conversation with Jeff Davis 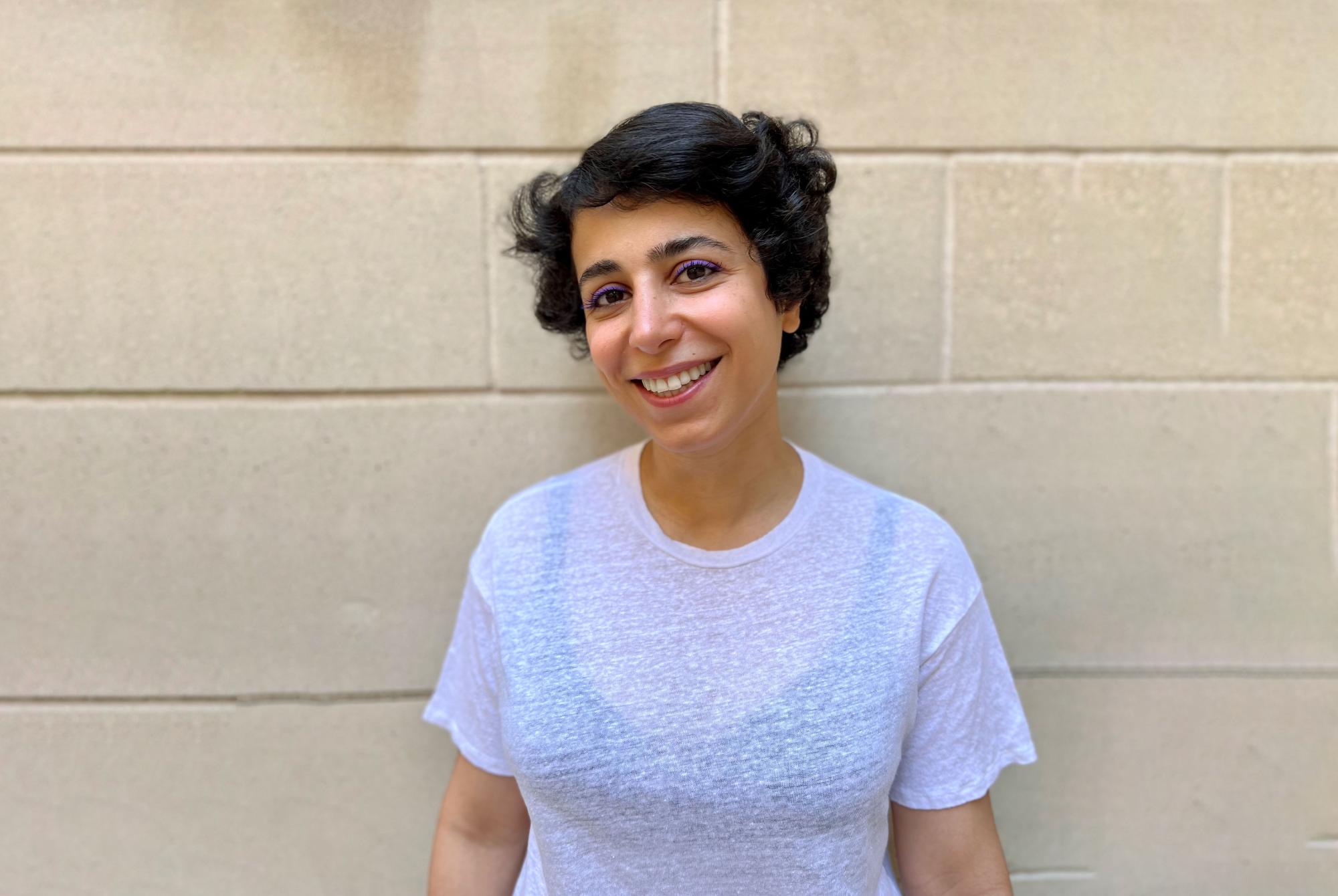 Armaghan Fatemi and Michael Elsdörfer of BYMA in conversation with Jeff Davis and Mimi Nguyen.

Jeff Davis: I think a good starting point would be to explain who BYMA is, how the two of you met, and then maybe speak a little bit about what it’s like working together as a duo?

Michael Elsdörfer: We've been a couple for a while, and because of Armaghan, I got increasingly interested in art over the years. Then NFTs came along, and we were both passionate about doing a project together.

Armaghan Fatemi: I always liked BYMA as a stage or brand name if Michael and I were to ever work on something together, because in English you can read it as "By Michael + Armaghan", and in Persian ma means "us". And with NFTs, there was finally an opportunity for this. I also initially didn't mind that this would keep my NFT work a bit separate from my traditional art practice, because of the stigma attached to NFTs. I've decided to just not care about this anymore however.

Michael Elsdörfer: It's a bit weird though, because, despite the name, I think BYMA is really Armaghan; I see myself more in the role of a fabricator who writes code, or someone to bounce ideas off of. I do involve myself with creative input and ideation, but I wouldn't call myself an artist.

Mimi Nguyen: M. C. Escher argued that Islamic art's repetitive patterns represented a superior source of knowledge that was established before mankind. The structure of his designs was a straightforward representation of these laws, since he believed that order, regularity, cyclical repetitions, and renewals are the 'laws of the phenomena' that surround us. Escher's depiction of 'impossible constructions' is his last and most well-known kind of work. His ability to depict contradictory three-dimensional scenes in two-dimensional spatial representations was remarkable (see the Waterfall). You wrote previously, that you are admirers of the possibilities provided by NFTs adding an interactive dimension to digital art, a kind of collective performance. Through your experimentations with blockchain as a medium of art in your projects, how do you see the evolution of creativity in on-chain art?

Armaghan Fatemi: I think conceptually there is a lot to explore with on-chain mechanisms. One of the interesting things to me is that there can be different kinds of relationships between collector and piece, beyond purchase and ownership. When NFTs react to on-chain events, or external ones, there is a kind of dialogue between the artwork and the world.

Michael Elsdörfer: With regard to using smart contracts, I'm actually a bit pessimistic, there are only so many transactional mechanisms one can explore. This isn't to say that artists will not continue to come up with great ideas, but really fresh ideas will probably become increasingly rare I suspect.

Mimi Nguyen: Islamic scientists in the 10th century were involved in three major mathematical projects: the completion of arithmetic algorithms, the development of algebra, and the extension of geometry. For your ArtBlocks series Two Mathematicians, you were inspired by Hankin's seminal 1908 paper 'Polygons in Contact', formalising the geometry behind Islamic patterns. How do you see the relationship between the deterministic nature of math and randomness in generative art?

Armaghan Fatemi: Islamic patterns are mathematical in the sense that they are all about repeating geometric shapes, and by calling the project "Two Mathematicians" we are leaning into this idea. But it's not like there is a particular math formula one needs to follow. There are really a set of rules, maybe even  guidelines, that you should follow, but then the rest is a wide open space to play with and be creative.

Armaghan Fatemi: I'm not sure how much randomness there actually is. Even for long-form, the artist is really creating this very particular algorithm designed to output these very particular images, and defining certain parameter ranges that are variable. The ultimate subset of outputs that are minted are random, but if you think about the artwork being the code itself, or the system that the code describes, there isn't actually much randomness there.

Michael Elsdörfer: There may be a certain amount of randomness in the final work based on which bugs you happen to run into, which then send you down a different path.

Armaghan Fatemi: For a piece like the one shown in Chromatics, we basically handpick the exact outputs we want, but then there is some randomness in the playback, where it loops a little bit differently each time.

Jeff Davis: I’m a big fan of Two Mathematicians on Art Blocks that focuses on pattern and symmetry. But now you’re working on a project that explores color! Could you describe the concept behind these pieces?

Armaghan Fatemi: The original idea was to take this particular way we experience colors, through the UI of digital art programs, and to find interesting ways to transform them or approach them in different ways. We aren't taking a scientific approach, we aren't looking at color theory. The color wheel itself is just a particular representation of the natural phenomenon that is colors.

Our starting point was an algorithm that takes the color wheel as input, and then uses a formula that it applies to each pixel to displace it. So if you animate this, it often looks like a force displacing the particles or pixels. It's interesting that a lot of the outputs we created are very visually distinct, yet the code is 95% the same, with only some formula and value changes.

Mimi Nguyen: As a trained mathematician, who also has a Painting degree from an art school, you've been exploring the concept of colours for a very long time, through your creative process, generative art but also theoretically as a lecturer and in your book "Foundations of color" in 2015. How did you become so passionate about colour theory?

Jeff Davis: Beyond a couple of painted color wheels, I didn’t really have any exposure to color theory until I took a color course during my graduate studies at The School of the Art Institute of Chicago. It was based on Josef Albers’ Interaction of Color and was a complete revelation. It really helped me ‘see’ colors and understand their relationships with one another. I was also exposed to the Ostwald and Munsell color systems which introduced an organizational element to color that matched my numeric thinking about composition. I volunteered to TA the course the following semester and started showing the class how to complete the Albers exercises digitally instead of using colored paper. After grad school, I spent 20 years in higher education teaching composition and color and wrote two textbooks during that time, Foundations of Design, and Foundations of Color. And I’ve been obsessed with exploring the primitives of both of these subjects in my own artistic practice as well!

Mimi Nguyen: Two Mathematicians is stripping ornamentation; what drove you to the new project with color?

Michael Elsdörfer: I wouldn't say that Two Mathematicians has been stripping ornamentation entirely. It doesn't use the traditional ornamentation you commonly see in Islamic patterns, opting instead for fills that are themselves based on simple shapes, lines, dots and the like. It barely uses colors; the few background colors that are there are actually a result of Jeff's encouragement. Armaghan came up with this concept of breaking down the color wheel, and it immediately spawned a number of ideas of how to do that. But it is in a way the opposite of what Two Mathematicians was.

Armaghan Fatemi: A lot of my previous work was on the conceptual-side or installation-based, and colors aren't necessarily the main priority. With weaving, you do use colors, but unless you are dying yourself, you tend to work with a limited selection. During lockdown, I started to experiment with painting and digital tools, and having this essentially infinite buffet of colors available was new. Exciting, but also challenging. And I'm not an expert in color theory, my entry point when working with Photoshop or Illustrator is pretty much the color selector in the app. So I wanted to deconstruct that, not from a scientific perspective, but in a somewhat fun, visually pleasing way.

BYMA is the alter-ego of artist Armaghan Fatemi, collaborating with her partner Michael Elsdörfer in the web3 space. Armaghan is a conceptual artist who has worked across a variety of media. She is particularly passionate about textiles, and has recently focused on traditional carpet weaving techniques from the country of her birth, Iran. “Invisible Hands”, her installation and documentary exploring the labor conditions of the production of these carpets were part of a recent exhibition at Quad Gallery in Derby. Michael is a software developer who tired of funneling bytes in and out of databases, and found a welcome reprieve in creative coding. They both live in London. Combining their passions for the arts and technology, they are interested in generative art, dynamic NFTs, and art that employs meaningful smart contract mechanisms.

Jeff Davis creates abstract work using algorithmic processes, exploring geometric structure and color arrangement through computation and iteration. He writes custom software in the programming language Processing that randomly determines compositional elements related to size, quantity, color, placement, and grid density within specified parameters. Davis has exhibited his artwork extensively at venues throughout the US, incl. Arizona State University, Lawrence University, the University of Minnesota, the Armory Center for the Arts in Pasadena, the Fort Collins Museum of Contemporary Art, the Center for Contemporary Art in Sacramento, and the Tucson Museum of Art.